Days fall short now, time cutting across day’s light, night coming too fast—before supper, before work can be done, before we are ready.

Gardens have been put to sleep—by us, or by nature—and while inside we work by light, outside, this early darkness awakens late fall’s chill.

Against this vague, ambiguous drift of days between November and March, skies sketch a steady kind of gray.

A Cat Sleeps in Our Garden

Tigers crush where Lilies sleep. A cat sleeps in the gardens today. He’s tucked in and around himself right now, curled up on a large, flat stone between a rose bush and a forsythia bush. His markings flank and imitate this late fall day around him.

Leaves are mostly fallen from the black walnut trees behind him, the roses lie dormant and sad after an early heavy frost last week, the mulch, well withered and now covered by brown crunchy leaves, work together to provide just the right amount of camouflage for his heavy tiger-striped frame.

He is a large cat. Daddy cat, perhaps, of the feral cats in this area. A show cat with markings parallel and perfect. He is a traditional striped cat, though with tufted fur, tufted ears, and a tufted chest. I remember the first time I saw him sitting on the brick path leading up to the garden gates. Stunningly beautiful, striking in that he just sat for the longest time, square on his haunches, front paws tight and connected, dark ribbons of stripes at perfect intervals up his legs. And that face. A large, perfect stare, eyes wide open, unafraid, as if saying something, but what, exactly?

He seems tended to, a house cat let outside, an unneutered cat left free to roam where might he may. I’ve only seen him twice, this tomcat unafraid. Unlike the feral cats who run skittish and fast, this tiger lumbers up our long drive, sauntering past the Weigela, passing by the just-last-summer planted dwarf-mounding chokeberry bushes, brushing past the dwarf cameo flowering quince. His haunches define his fearlessness, his size alone big enough to take down another male cat foolish enough to enter his territory, his domain, these, our Gardens at Effingham. 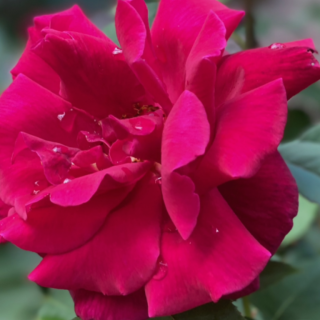 Rememberer of dreams. Whisperer of gardens green. At the whim of "Most Beloved" and a hot cup of tea. I live life between, straddled here now and then, My continuity through writing-- Pen dripping ink, mind swirling confused, Love lingering still, and Most Beloved's purring soothes. Blogger at "Gardens at Effingham" (where cats do the talking) and "My Forever Son" (where a mother's heart runs deep after losing her son to suicide) Musician. Writer. Literary Connoisseur. At the whim of a calico cat and a strong cup of tea.

Happy Spring and Artful Blooms! A Poem by the Cat

Celebration in Spring Blooms by Most Beloved The serviceberries opened their white blossoms this week. A gentle breeze scatters their petals and airborne, they sift and drift down, joy in their flight, celebration in their journey.

A Mother’s Day to Remember–Cali Cat Has Kittens

A glorious May Mother’s Day, replete with brilliant blue skies and wisps of sun-drenched clouds, became gardens requiring enormous clean-up once the storm had passed. We had walked in the mid-afternoon, savoring the sun and remarking on the cerulean blue sky. But we had no longer returned home before the skies grew dark and the […]